MEET Las Vegas teamed up to turn Las Vegas (RED) this December 1st. MEET was proud to be a part of the national awareness campaign by (RED) this World Aids Day. The campaign saw iconic landmarks from around the world wash themselves in red to build awareness for the global fight against AIDS. 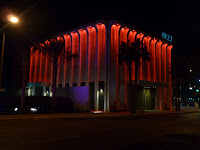 The campaign to turn the world (RED) is supported by individuals and businesses around the world including (RED)’s millions of fans, partners, the (RED) NIGHTS concert series and most importantly, iconic landmarks around the world. In 2009, 12 cities went (RED) and dozens more have already signed up for 2010. To get involved, visit (RED)’s website, http://www.joinred.com/takeaction.

About (RED)™and (PRODUCT) RED™
(RED)’s primary objective is to engage the private sector in raising awareness and funds for the Global Fund, to help eliminate AIDS in Africa. Companies whose products take on the (PRODUCT) RED mark contribute a significant percentage of the sales or portion of the profits from that product to the Global Fund to help finance HIV/AIDS programs in Africa, including interventions targeting women and children. Current partners are: American Express (U.K. only), Apple, Bugaboo, Converse, Gap, Emporio Armani, FLOWE(RED) (U.K. only), Hallmark (U.S. only), Dell, Nike, Penguin Classics and Starbucks. Since its launch in the Spring of 2006, over $150 million has been generated by (RED) partners and events for the Global Fund. (RED) money is at work in Ghana, Lesotho, Rwanda, South Africa, Swaziland, and Zambia and supports programs that have reached more than 5 million people. For more information, visit www.joinred.com.