A Tour of City Center

On December 13th, I had the pleasure of touring the new Crystals Mall at City Center with my great pal and business associate, Patricia Fripp.

Fripp is an internationally known speaker and professional speaking coach. Patricia and I marveled at what we could see of City Center. Magnificent can’t even describe it! 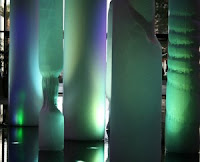 While only 20% of the retail stores are open, a full house of luxury retail will soon ascend in the coming months. What was most intriguing about the mall as well as the front grand entry of Aria are the water features. There is no way to truly categorize the water features of City Center. One of the installations in the mall is called Glacia. It is 13 massive and towering shafts of ice that seamlessly merge from a shallow black granite pool of water.
While Patricia and I were standing there, marveling at this work of art, Fripp noticed a gentleman standing by Glacia. He had on a jacket that said WET. Patricia was certain that he was with the company that designed the many water features we had enjoyed at City Center; we approached him. We were met by the most humble of gentleman. In fact, this cordial man is none other than Mark Fuller, Chief Executive Officer and owner of WET! Mr. Fuller and his team of 250+ people who are employed by WET are responsible for over 2,500 major water installations worldwide. Of course, one of the premier features in Las Vegas, the fountain in front of the Bellagio is, in fact, Mark Fuller’s creation.
Go to http://www.wetdesign.com/ to learn more about WET and the many worldwide landmarks they’ve created. Mark Fuller and WET are more about the Las Vegas landscape than most would know.
WET is working on a product line of smaller scale water features that will be introduced to the market in the coming months. Finally, the unique inventions of WET will be available for luxury homes and commerical office projects.
I certainly hope Mark Fuller and WET will consider MEET Las Vegas for their launch and showcase of their new portable designs.
0